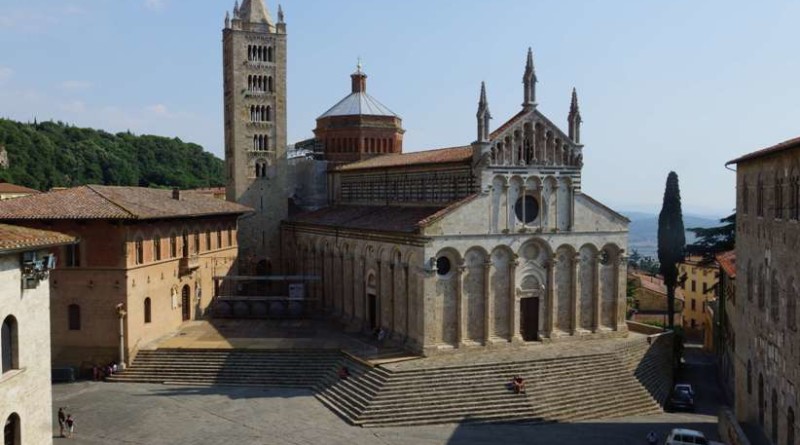 The NOSA-ITACA code has been used to model the static conditions of the dome of the San Cerbone Cathedral. The study has been carried out within the framework of the research project “Structural assessment and evaluation of the seismic vulnerability of San Cerbone Cathedral in Massa Marittima (Grosseto), aimed at identifying the need for reinforcement operations”. The project, conducted by the University of Pisa and the University of Florence and funded by the Diocese of Massa Marittima and Piombino, aimed to identify the origins of the widespread fracturing occurring on the dome and to simulate some restoration operations.

The dome, made of clay bricks and lime mortar, consists of an octagonal cloister vault resting on a masonry drum. Four trumpet squinches provide connection to the church sub-structures, consisting of two transverse arches and two longitudinal arcades. One of the transverse arches, which has been fitted with a metallic tie-rod, is made of brick masonry, whereas the other is stone masonry. Probably due to the insufficient material strength and the absence of lateral restraints, the first arch has been unable to bear the load of the overlying dome and has been documented as damaged already centuries ago. Thanks to the calculations performed via the finite element model of the dome, the cause of the damage in the vault has been ascertained.

In order to understand the causes of the damage, several numerical models were created via the NOSA-ITACA code and another commercial software package; these have allowed evaluating the function and peculiar damage state of the different structural elements.